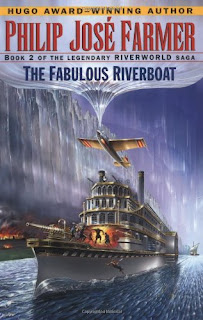 Like every other human being who’s lived and died on Earth, Sam Clemens (aka “Mark Twain”) has been brought back to life on a mysterious planet, in a youthful body (about 25 years old), with food, drink, and other sustenance (including booze, cigars, cigarettes, and the hallucinogenic “dream gum”) all magically supplied on a regular basis by whoever created this brave new world.

Like about half of the population, Sam doesn’t consider this miraculous rebirth to be a blessing.  There are no houses to live in, no clothing to wear, and no furry animals to kill for their skins.  Food and drink may abound, but there are lots of fellow humans out there, from various times in the past, who are willing to bully others and practice extortion, or worse, in exchange for their daily ration.  This isn’t Paradise by a long shot.

And like just a select few of those resurrected, Sam is convinced that the creators, whoever they are, are just cosmic puppeteers, manipulating the Earthlings for some unfathomable reason.  Sam wants answers, and he's convinced they can be found at the source of the great, millions-of-miles-long River, where something called “the Misty Tower” is reported to stand.  And since everyone is immortal – they can be killed, but they just pop up the next day in some other random place on this planet – he’s got the time to make the journey there.

But how?  Walking along the riverbanks is too dangerous, the new inhabitants are all very territorial.  Get yourself killed, and there’s no telling where you’ll reappear.  It’s safer on the river itself, but of course, you’d need a boat.  Not just any boat, either, but one’s that bigger, faster, and better-armed than anybody else’s boat.

How about a fabulous riverboat?  With two giant paddlewheels, a big furnace to propel them, and guns mounted on top for protection.

Except there’s almost zero metal on this crazy planet.  And no iron means no steamboat.  Whatcha gonna do about that, Sam?

What’s To Like...
The Fabulous Riverboat is the second book in Philip José’s 5-book “Riverboat” series.  I read Book One a couple months ago; it is reviewed here.  Despite this being a sequel, the cast of characters is almost 100% new; the only recurring one being Hermann Goring.  Sam Clemens replaces Sir Richard Burton as the main protagonist.  Presumably there will be a merging of the two casts at some point down the line.

Most of the world-building was done in the previous book, so there is more emphasis here on figuring out the Ethicals’ (those who created the world and resurrected the humans) plan and Sam Clemens’ obsession with foiling it.  A couple more of the “Chosen Twelve” (those humans selected by a renegade Ethical to accompany Sam on his odyssey of destruction) are revealed, meaning about half of them have now been tagged.

Two of the storylines from Book One – getting to the source of the great River and figuring out who the “Mysterious Stranger” is – are continued here, and a third one is added – the building of the titular Fabulous Steamboat.   The bulk of the story deals with this third plotline.  To accomplish this, Sam and company have to carve out their own little kingdom, in order to develop several industrial processes.  They name their powerbase “Parolando”.

Once again, Philip José Farmer injects all sorts of historical persons and peoples into the story.  Sam is forced to join forces with the treacherous King John of England, and the titanthrop (what?) Joe Miller.  Herman Goring is now a zealous evangelist, which is a literary mind-blower for me, and Sam encounters his earthly wife, Livy, only to find out she’s now hooked up with Cyrano de Bergerac.  It's complicated.

Being a scientist, I liked the role that chemistry plays in the story.  Gunpowder is made by combining sulfur, charcoal, and human excrement; and factories for manufacturing sulfuric and nitric acids are built.  I was disappointed that the actual construction of these processes is passed over, but I recognize that detailing such engineering feats would be boring to most readers.  I also enjoyed the made-up cuss phrases, such as: “teach your grandmother to suck eggs”; as well a real-life French one that we won’t list here.  And if you’re ancient enough to remember when Esperanto was being touted as the linguistic panacea, you’ll enjoy it being used here.

Kewlest New Word...
Texas (n.; nautical) : a structure on a riverboat containing the pilothouse and the officers’ quarters.

Excerpts...
"It’s a sad world, just as sad, in most ways, as the old Earth.  Yet we have our youthful bodies again, we don’t have to work for food or worry about paying bills, making our women pregnant, catching diseases.  And if we’re killed, we rise up the following day, whole and hearty, although thousands of miles from where we died.
“But it is nothing like what the preachers said it would be.  Which isn’t, of course, surprising.  And maybe it’s just as well.  Who’d want to fly around on aerodynamically unstable wings or stand around all day playing harps badly and screeching out hosannas?”  (pg. 238.  Note: All page numbers refer to the paperback “bundle” version which combines Books One and Two.)

Lothar von Richthofen and Gwenafra were not getting along at all.  Lothar had always been a “lady killer”, and he could not seem to help flirting.  More often than not, he followed up the flirtation.  Gwenafra had some definite ideas about fidelity with which Lothar agreed, in principle.  It was the practice that tripped him up.  (pg. 396)

“Steer me, stymate!  Do I read you unfrosted?”  (pg. 394)
I had a number of issues with The Fabulous Riverboat, some nitpicky, others serious.

Joe Miller, a major character, thpeakth vith a lithp like thith and that got really tiresome, really fast.  And although Philip José Farmer creates a fascinating brave new world, with all sorts of historical characters that any history buff will love, quite often they don’t play any significant role in the story.  It’s almost as if he’s just trying to see how many of them he can drop into one book.

More seriously, there isn’t a lot of action until about three-quarters of the way through the book.  Instead, the reader gets a bunch of mini-discourses about racism, segregation, religion, the downside to industrialization, etc.  Admittedly, those are all worthy subjects, but they’re not why people read science fiction novels.

Lastly, and not leastly, there’s the ending.  It doesn’t  really “end” anything, although that’s not uncommon for a middle book in a sci-fi or fantasy series.  I can’t quite accuse it of being a cliffhanger (one of my reading pet peeves), and I suppose you could say it stops at a logical place.  Nevertheless, I found it to be inadequate.

5½ Stars.  There were some bright spots in The Fabulous Riverboat, especially the last quarter of it, but overall it left me disappointed.  Book Four, The Magic Labyrinth, is on my TBR shelf and is the first concluding book, since Philip José Farmer later wrote a second closing book, Gods of Riverworld.  The latter gets blasted by Amazon reviewers, so I’m leaning towards skipping Book Three and going straight to Book 4, the ending-that-eventually-wasn’t-the-end.
Posted by Hamilcar Barca at 2:19 PM