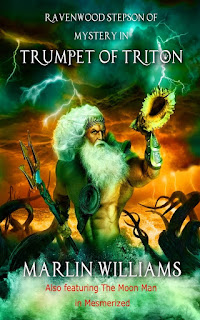 Do you remember reading pulp fiction magazines when you were a child?  The five-and-dime stores used to sell them, and they featured some old-time heroes such as Doc Savage, Buck Rogers, Tarzan, Zorro, and The Shadow.

Yeah, me neither.  Mostly because their heyday was way back in the 1920’s-30’s, and that’s a bit before my time.  I do remember spending my 25-cents-a-week allowance on Tarzan and Zorro comic books as a kid though, in the late 50’s, but by then the pulp magazines, and most of their heroes, had pretty much faded into oblivion.  Which is kinda sad, given how popular they once were.

Fortunately, Marlin Williams is both a longtime fan of pulp fiction and a veteran author of bizarre tales.  He’s taken a pair of long-forgotten pulp heroes, Ravenwood Stepson of Mystery and the Moon Man, and given them new life in the two stories in this book.

This means you can now journey back in time and discover what your father (or grandfather, or great-grandfather) used to read for entertainment when he was just a young ‘un.  And that's kind of magical.

What’s To Like...
The characters Ravenwood Stepson of Mystery and the Moon Man are both creations of Frederick C. Davis (1902-1977), who doesn’t even rate a Wikipedia page, even though Moon Man does.  I like that their “super powers” aren’t very super.  Ravenwood gets some occasional psychic advice from his guru, “The Nameless One”, while the only “special” thing the Moon Man has going for him is a spiffy costume with a bulletproof helmet that conceals his identity.

Trumpet of Triton/Mesmerized is a duology (shouldn’t we call it a "bilogy"?) with the heroes getting separate storylines set in different US locations (New York City and ‘The Great City’) in the 1930’s.  Despite both being Pulp Fiction, the subgenres are different.  The Trumpet of Triton has fantasy and mythological tones (and I’m very partial to anything with Mythology in it), while Mesmerized can be best described as a “Caped Crusader Robin Hood” tale, and I also enjoy those immensely.

Each story is about 80-90 pages in length, so I’d call them novellas.  The action in both starts immediately, the pacing is brisk, and Marlin Williams gets the characters introduced to you in short order.  At their core, both tales have a mystery to solve, and there's lots of suspense and intrigue to keep our heroes on their toes.

I liked the literary nod to the old TV show, Kolchak, in Trumpet of Triton.  I was intrigued by The Nameless One, and I fell for the red herring in the plotline, but so will most readers.  Mesmerized surprised me with its clever plot twist and introduced me to the way-kewl word “catawampus” (see below).  I also liked the interactions among the Moon Man and his teammates.

Both tales are standalone stories.  There are no chapters in either, but they are short enough not to need them.  If you want to read more stories with Ravenwood Stepson of Mystery, there are at least two recent publications featuring him available for your Kindle.  If you’d like to read Frederick C. Wilson’s original tales about these two superheroes on your Kindle, ANAICT, you’re out of luck.

Oh yeah, there's a neat epilogue in the Trumpet of Triton.  I'll leave it to you to figure out its significance.

Excerpts...
“Oh, and one more thing,” she said softly.
He watched as she reached down and unfastened the top button of her blouse.
“This is the only way I can pay you for your services.”
Now, Ravenwood was more than intrigued, he was mesmerized as she unfastened the second button.
She dipped her hand into her shirt and dredged up an amulet suspended by a gold chain.  “Do you know what this is?”  (pg. 12)

“The Moon Man may be a thief, but he’s not a killer.”
“Capone didn’t start out killing people either and look where his career took him.”  Gil took a drag off his cigar.  The tip fired red.  “Come to think of it, Capone’s a Girl Scout compared to the Moon Man!”  His words streamed out from his mouth encapsulated in puffs of smoke.
“He steals from the rich and gives it to the poor.  What’s wrong with that?”
"Ha!  You’re an officer of the law.  You should know that answer to that!”  (pg. 104)

“They are Atlanteans.” (…)   “Like from Georgia?”  (pg. 60)
One of my hobbies over the years has been converting old vinyl LP’s into digital format.  I mainly select old and obscure artists and boxed sets; the kind often found at your local Goodwill store.  There’s really no reason to do this with, say, an old Beatles or Elvis album, since Amazon already has those available as digital downloads.  But I find it supremely rewarding to “resurrect” the music of someone not-so-famous that hasn’t been played in decades.

That’s the way I feel about Marlin Williams reviving Ravenwood Stepson of Mystery and the Moon Man.  I’d never heard of either of these characters before, now I’m familiar with both of them.  And somewhere in the anthropomorphic reaches of our universe, two pulp heroes are smiling.

I just don’t know whether to hope that Marlin Williams finds other long-forgotten pulp heroes to revitalize, or that he develops extended series for these two.  Maybe I should hope for both?!

9 Stars.  Wikipedia has a fascinating article on Pulp Magazine which gives the history of this literary genre.  The link is here, but it also redirects from a Wiki search for “Pulp Science Fiction”, which is how I stumbled across it.
Posted by Hamilcar Barca at 11:31 AM