Harry Potter and the Prisoner of Azkaban - J.K. Rowling 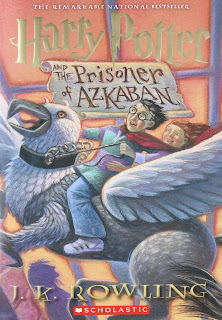 Summer vacation is over, and it’s time to go back to school.  For Harry Potter and his best friends Hermione Granger and Ron Weasley, that’s a highly-anticipated occasion since they are all now third-year students at the Hogwarts School of Magic.  We’d call them “juniors”, but Hogwarts is a seven-year academy.  But at least they’re getting close to being upperclassmen.

They’ll all be taking some neat classes this year.  Professor Snape is back to teach them even more about Potions.  Professor McGonagall will introduce them to the art of Transfiguration.  The aptly-named Professor Sprout (perhaps a nod to Robert Rankin’s character “Barry the Time Sprout”?) will bore them to tears with lectures on Herbology.  And none of them sees any future in taking Professor Trelawney’s class on Divination.

A new professor has joined Hogwarts this year.  Professor Lupin will teach the course called “Defense Against the Dark Arts”; Harry and his companions are all VERY interested in that class.  The class has been offered at Hogwarts for years, but it seems like every professor who teaches it only lasts for one year.

Finally, Hagrid, the Hogwarts gamekeeper, has been promoted to Professorship, now that his name’s been cleared.  He’s extremely excited about teaching a brand new course, “The Care of Magical Creatures”.

All-in-all, it promises to be an exciting year for Harry.  Alas, it’s a pity that one of the most dangerous inmates at Azkaban prison has escaped and is coming to kill him.

What’s To Like...
Harry Potter and the Prisoner of Azkaban, the third book in J.K. Rowling’s boffo series, is every bit as good as its predecessors.  There’s a new Ultimate Evil to threaten Harry (who’s capable of slipping through the best Hogwarts defenses), a complex storyline that will entertain adult and teen readers alike, and of course, an exciting Quidditch season.

There are a whole bunch of new critters (some good, some evil, all bizarre) to study and beware of.  You can see one, called the hippogriff, on the book cover image above.  There seemed to be a few less puns this time, but they’re still present : Diagon Alley, Owl Post Again, and the esoteric groaner, Madam Cassandra Vablatsky.  I liked the imaginative names of the Magic textbooks, such as “Broken Balls: When Fortunes Turn Foul”.  Ditto for the names of the various charms that can be cast.

Besides the main storyline – Sirius Black, the escaped prisoner from Azkaban, coming after Harry, I counted at least six secondary plot threads.  1) Why did the Fat Lady go missing?  2) What’s up between Crookshanks and Scabbers?  3) What about the big shaggy black dog that keeps showing up at critical points in Harry’s life?  4) How does Hermione cope with taking a double-load of courses, several of which are scheduled for the same time slot?  5) Who’s poisoning Professor Lupin?  6) Will House Gryffindor sweep its Quidditch matches with Harry as its seeker?

As always, I loved J.K. Rowling’s attention to detail.  The Sorting Hat, Platform 9-3/4, the Whomping Willow, and the newspaper The Daily Prophet are all back, and you’ll be introduced to things like a Pocket Sneakoscope, a Broomstick Servicing Kit, a Knight Bus, O.W.L.S and N.E.W.T.S., and the ever-popular Dungbombs (they’re always a blast!).  And if you’ve forgotten the bizarre rules of Quidditch, they’re given again on page 143.

Once again, there are a slew of characters to meet and follow.  Malfoy returns to bedevil Harry, but naturally he gets his comeuppance in the end.  I was particularly impressed by the way Professor Snape was portrayed.  Just because he’s mean and hates Harry, doesn’t mean he’s evil, does it?  Hmm.

The backstory is given in Chapter One.  There are 22 chapters covering the 435 pages, which makes them of moderate length.  In my edition, each chapter starts with a drawing of the relevant theme of the chapter, which I found to be way-kewl.  Harry Potter and the Prisoner of Azkaban is a standalone novel, in addition to being part of a series.  Last, and least, the phrase “bated breath” is used, and properly so.   As a part-time editor editor, I’m happy to see that grammatical debate put to rest on this.

Excerpts...
“Where is dear Professor Lupin?”
“I’m afraid the poor fellow is ill again,” said Dumbledore, indicating that everybody should start serving themselves.  “Most unfortunate that it should happen on Christmas Day.”
“But surely you already knew that, Sybill?” said Professor McGonagall, her eyebrows raised.
Professor Trelawney gave Professor McGonagall a very cold look.
“Certainly I knew, Minerva,” she said quietly.  “But one does not parade the fact that one is All-Knowing.  I frequently act as though I am not possessed of the Inner Eye, so as not to make others nervous.”
“That explains a great deal,” said Professor McGonagall tartly.  (pg. 229)

Their second to last exam, on Thursday morning, was Defense Against the Dark Arts.  Professor Lupin had compiled the most unusual exam any of them had ever taken: a sort of obstacle course outside in the sun, where they had to wade across a deep paddling pool containing a grindylow, cross a series of potholes full of Red Caps, squish their way across a patch of marsh while ignoring misleading directions from a hinkypunk, then climb into an old trunk and battle with a new boggart.  (pg. 318)

Never trust anything that can think for itself, if you can’t see where it keeps its brain.  (pg. 194)
The ending has a bunch of twists.  All the plotlines cited above are resolved.  It takes a couple chapters to do so, but that means nothing feels rushed.  I’m pleased to say I guessed correctly regarding the resolution of the main storyline, but I still got surprised by how most of the secondary ones worked out.  Hermione’s trick to taking so many courses was a particularly delightful twist.

I don’t really have anything to quibble about in Harry Potter and the Prisoner of Azkaban.  There’s nothing R-rated in it, and no justification for anyone to demand that it be banned from school libraries.  We truly are being overrun by literary ignoramuses.

Book 4 in the series, Harry Potter and the Goblet of Fire, sits upon my TBR shelf, waiting for my attention.  All 752 pages of it.  I may have to ask Santa to bring me the next couple of books in the series.  I have noted that every book seems to be getting lengthier.  Robert Jordan would be proud.

9 Stars.  One last, small plus from reading this book.  A long time ago, back in the heyday of Blogspot, I used to follow a blog called Padfoot and Prongs.  I was always clueless but curious as to why it was called that.  Now I know.
Posted by Hamilcar Barca at 7:26 PM