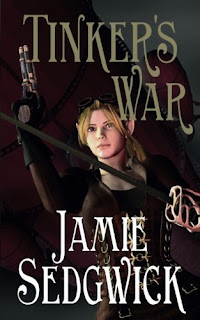 The Vangars.  They came, in their dragon ships of death.

They saw.  The lands of the humans, the Elvish Tal’mar, and even the giant Kanters.  All of whom were squabbling amongst themselves.  All of whom failed to realize the danger came from without, not within.

They conquered.  They focused on the palaces of the reigning kings and queens, dropping bombs of unimaginable size and deadliness, and killing the rulers of each empire.  Then they swept into all the major cities in their, in their dragon ships, protected by gyroplanes, capturing and enslaving most of the civilians before they had a chance to flee.

Yet a few made it out and went into hiding in the mountains.  Including Breeze.  The half-breed.  The tinker’s daughter.  The pilot.  The healer.  But she’s just one fighter.  What can she do against the overwhelming Vangar invasion force?

What’s To Like...
Tinker’s War is the second book in a series about a half-elf/half-human girl named Breeze growing up in a bleak, futuristic world that reminds me of China Miéville’s Railsea setting.  This is vintage Jamie Sedgwick - the action starts right away with the Vangars attacking everyone all at once, and doesn't let up until the very end.

Yet there is more to Tinker’s War than just thrills and spills.  Our half-breed heroine has a pair of suitors vying for her hand – one human, the other elf.  Neither one will take “no” for an answer, and both are jealous of each other.  But be of good cheer, male readers.  While this thread runs throughout the book, the romance never gets in the way of the excitement and fighting.

I’m also thinking Jamie Sedgwick must be a mechanical engineer in real life, because we get some keen insight (usually courtesy of Tinker) into various mechanisms – the steamwagons, the dragon ships, the gyroplanes with their spring engines, piston motors, spring-loaded revolvers, and the strangest of all, at least to our heroes, the electric light bulb.

The genre style is much more steampunk than fantasy.  Outside of the elves, it seems the only other magic is the gift of healing.  There is a hint of trolls, though.  And dragons abound in other books set in this world.

The story is told from a first-person POV, Breeze’s, of course.  There are 32 chapters for 327 pages, plus an 18-page preview of the next book in the series.  Overall, Tinker’s War is a quick and easy read, which was exactly what I was looking for.

The ending is so-so.  Nothing is resolved, the Tal’mar still are in firm control of their newly-conquered territory.  But there’s a nice tie-in to the conjunctive series Aboard The Great Iron Horse, and the Vangars are a dominant force in that setting.  So their sustained success here is consistent with the overall storyline.

Excerpts...
“This is no life you have, Breeze.  You’re not living, you’re hiding.”
I pulled my hands away from him and placed them on my lap.  “I’m doing exactly what I want to do, Robie.  Look at me.  Look at my face, my ears.  Do you think I’m one of your farm girls?  Do you envision me standing at a cook stove all day, my belly swollen with child, our house full of chaos and noise?  Is that what you want?”
A mystified look swept across his face.  “Cook stove?  I don’t know… you do cook, don’t you?”  (loc. 87)

I had long since learned that few people possess the kind of fortitude it takes to question their leaders.  Humans and Tal’mar are no different when it comes to this.  The individual is always more worried about calculating his or her personal outcome in a situation than making that situation a success.  Regrettably, I had come to learn that many people would choose to loose (sic) the war if it meant they could be the head slave, rather than win the war and be equal with everyone else.  (loc. 2454)

Kindle Details...
Tinker’s War is priced at $0.99 at Amazon.  The first book in the series, The Tinkerer’s Daughter is free, and the final book, Blood And Steam, sells for $2.99.  Jamie Sedgwick has a slew of others e-books and series available at Amazon, ranging in price from free to $3.99.  Those are great prices for books of this caliber.

“The hair in my nose keeps growing back no matter how much I trim it, but lose an arm or leg, or even a finger, and it’s gone forever.”  (loc. 290)
There are a couple quibbles, none all that serious.

First, there is little or no backstory, and it’s been two years since I read the first book in this series.  This isn’t all that critical, though, because of the episodic nature of the book.  More on this in a bit.

Second, while getting into occupied cities is understandably a cinch, I found it curious how easily our plucky heroes could get out of them as well, even when there were a bunch of noisy humans in the group.  It was also odd that the Tal’mar Queen’s name is never mentioned.  I couldn’t recall it.  Maybe Jamie couldn’t either.

Finally, given that the dragon ships make use of giant balloons containing flammable gas to keep them aloft, the good guys take an incredibly long time to wonder if that might be a weak spot in those airships’ defenses.

7½ Stars.  I’m beginning to gain a better insight into Jamie Sedgwick’s intent when writing a story, and more importantly, when he’s writing a series.  It doesn't seem like he's too concerned about furthering the overall plotline in the series.  Here, the main thread is the Vangars kicking butt all over the place, and the author doesn’t appear to feel any obligation to resolve that anytime soon.

Instead, this book, and others written by him, have a feel of simply being “episodes” in his excellently-constructed post-apocalyptic world.  It’s kinda like watching any of the TV series of, say, Star Trek.  You know you’re in for a fascinating hour-long story.  But if you ask yourself how it furthers the five-year mission to boldly seek out and explore new worlds, well, frankly, it doesn’t.

If Gene Roddenberry can get away with this, I suppose Jamie Sedgwick should be allowed to as well.
Posted by Hamilcar Barca at 11:28 AM