Harry Potter and the Chamber of Secrets - J.K. Rowling 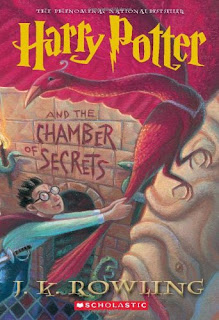 Yippee!  Summer vacation’s almost over, and it’s almost time to go back to school!

Well, there aren’t many kids that would have such a sentiment, but Harry Potter happens to be one of the few.  That’s because he has to spend his summers with Uncle Vernon, Aunt Petunia, and their brat for a son, Dudley.  Harry’s owl is confined to a cage, his wand is locked away, and he’s forbidden to even utter the word M-word (“magic”), let alone practice it.  For a magician like Harry, living among Muggles (those devoid of any magic powers) can be sheer drudgery.

So it is a welcome relief from the tedium when a magical being comes to visit Harry.  A sprightly little house-elf named Dobby.  Unfortunately, Dobby bears a message for Harry, and it is not the cheeriest one to receive.

What’s To Like...
Harry Potter and the Chamber of Secrets chronicles the sophomore year of Harry, Hermione, and Ron at the Hogwarts School of Witchcraft & Wizardry, hereafter known simply as “Hogwarts”.  There’s a short backstory (pages 2-4) which came in handy for me, since it’s been at least 15 years since I read Book 1.  The book is a quick and easy read, which is the ideal for a YA novel.  The pacing is brisk (for the most part), yet somehow the various characters get nicely developed alongside the constant action.

Speaking of characters, there are a slew of them.  I think most of them are repeats from the first book – Harry’s family members, the Weasley family, his fellow students, and the professors and employees at Hogwarts.  If you have all those already locked in your memory cells, keeping track of the new ones will be a breeze.  Each of the 18 chapters in my book leads off with a kewl drawing, although your version may or may not have those.

J.K. Rowling spins a variety of neat fantasy critters into the story, including gnomes, ghouls, pixies, a boarhound, ghosts, a poltergeist, and even a phoenix.  The obligatory quidditch match starts on page 107, and I chuckled at things like floo powder, a red howler, a “Deathday Party”, and the pejorative “Mudbloods”.  There are also rib-tickling puns woven into the text; for instance, a pair shady streets called Diagon Alley and Knockturn Alley.

The storyline thread dealing with the titular Chamber of Secrets doesn't get started until page 138.  The main mysteries for Harry to solve are: a.) who opened it 50 years ago, b.) who just opened it again, c.) what sort of evilness has been unleashed, and d.) where dwelleth that evil?  The threads of this plotline are laid out meticulously, with a bunch of clues for Harry (and the reader) to ponder.  For instance, it becomes obvious at a certain point that a trail of spiders is a vital clue, but what exactly does it mean?

I liked that not everything is as it seems, and that sometimes Harry and his friends are wrong in their suspicions.  The ending will be exciting for both adult and YA readers.  All the threads get tied up nicely.  Harry Potter and the Chamber of Secrets is a standalone story, as well as part of a series.

Excerpts...
“You’re making fun of me,” she said, silver tears welling rapidly in her small, see-through eyes.
“No – honestly – didn’t I just say how nice Myrtle’s looking?” said Hermione, nudging Harry and Ron painfully in the ribs.
“Oh yeah –“
“She did –“
“Don’t lie to me,” Myrtle gasped, tears now flooding down her face, while Peeves chuckled happily over her shoulder.  “D’you think I don’t know what people call me behind my back?  Fat Myrtle!  Ugly Myrtle!  Miserable, moaning, moping Myrtle!”
“You’ve forgotten pimply,” Peeves hissed in her ear.  (pg. 134)

“Are you crazy?” said Ron.  “It could be dangerous.”
“Dangerous?” said Harry, laughing.  “Come off it, how could it be dangerous?”
“You’d be surprised,” said Ron, who was looking apprehensively at the book.  “Some of the books the Ministry’s confiscated – Dad’s told me – there was one that burned your eyes out.  And everyone who read Sonnets of a Sorcerer spoke in limericks for the rest of their lives.  And some old witch in Bath had a book that you could never stop reading!  You just had to wander around with your nose in it, trying to do everything one-handed. And –“
“All right, I’ve got the point,” said Harry.  (pg. 230)

“Peskipiksi Pesternomi!”  (pg. 102)
It’s hard to nitpick a book that has garnered eye-poppingly phenomenal ratings at both Amazon and GoodReads.  But here are a couple:

It takes a while for the main thread to get going, and that in turn made for a couple mildly slow spots in the early going.  But that also coincided with how far I had read this book in French years ago: up to about page 68.  Once I got to “new” chapters, the slow spots disappeared.  Maybe there’s a lesson there about going back and re-reading books.

There are several dei ex machina (I had to go look up what the plural of deus ex machina was) in the story, and that may lead to some rolling of the eyes of adult readers.  But methinks YA readers won’t give a Hedwig hoot about those.

That’s about it.  Harry Potter and the Chamber of Secrets turned out to be a fun-filled read, even though I’m not in the target audience.  It brought back great memories of plowing through the first book in French, which expanded my FSL ("French as a Second Language") vocabulary considerably, and which included some head-scratching translations of non-translatable words, such as “Muggles” which become “Moldus” in French.