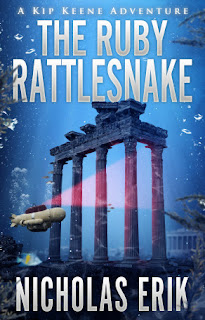 Run, Rabbit, run!  You may be a lean, mean, fighting machine, but you’re also nothing but a laboratory rat in Commander Owens’ “Project Atlantis” lab experiment, and if you stay there, you’re days are numbered.

If you can find Kip Keene, you stand a very slim chance of eluding the long and intrusive grasp of Commander Owens.  Then again, you may just die anyway.  Because you’re not the only enhanced creature in the laboratory, Rabbit, and the others are more powerful than even you.

What’s To Like...
The Ruby Rattlesnake is an Indiana Jones type of action-thriller.  Things start fast and furious right away, the pacing is crisp, and we get to tag along with Kip Keene and Strike as they try to figure out what the heck the Ruby Rattlesnake is.  The settings are neat, especially Barcelona (with the way-kewl Sagrada Familia getting a mention), where most of the second half of the book takes place.  And of course, there’s Atlantis to explore as well.

There’s not a lot of characters to keep track of, which can either be a plus or a minus.  Ditto for the UE (Ultimate Evil) which changes a couple times in the book.  I think that’s quite rare for this type of story, but it seemed to work here, despite making the tension level bob and weave a bit.

Everything builds to a satisfying climax, and like any Indiana Jones tale, a bit of the paranormal creeps in, which helps keeps things interesting.  This is a standalone novel, despite being part of a series.  No cheap-shot cliffhanger crap here.

There is some “adult language” which I found unnecessary, since I presume the target audience here is teenage boys.  The writing is so-so, it didn’t draw me in; but the storytelling is quite good.  Stephen King gets criticized for this same thing.

There are a lot of references back to Book 1 in this series, which I haven’t read.  More on this in a bit.

Kewlest New Word…
Wiftiness (n.) : a somewhat made-up word, but “wifty” is real and is a synonym for the adjective “ditzy”, so this word means “ditziness”.

“You smell like a marijuana farm got in a fight with a Mountain Dew factory.”  (loc. 644)
It’s a funny thing about this e-book.  Book 1, The Emerald Elephant, is often available for free, and that is what it appeared I had downloaded.  And the e-book has the TEE book cover, as well as calling it that in the header.

But the text itself is The Ruby Rattlesnake, and this confused the heck out of me for about 10 pages.  I’m not complaining; I still got a free book to read.  It just wasn’t the first book in the series.  For all I know, Nicholas Erik may have fixed this glitch by now.

To sum up, this was an okay read, with lots of thrills and spills and no slow spots.  The writing could be stronger and the characters could be a bit more complex.  I never did figure out the need to cast Kip Keene as a space pirate, but perhaps that had more relevance in the first book.

7 Stars.  Add ½ Star if your download was indeed the book you were expecting.
Posted by Hamilcar Barca at 5:54 PM