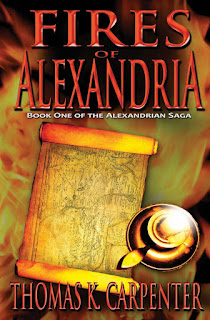 It is not the best of times for Heron.  She’s trying to take care of her late brother’s machine-shop business, but he’s run up so many debts that she can barely pay the interest on them.  To boot, her teenaged niece, Sepharia, yearns to be free to travel the dangerous streets of 1st-century Alexandria, and feels Heron is being overly-protective of her.

Heron’s got her own perils.  Since it’s a man’s world, women running businesses is a no-no.  So she is impersonating her late brother, hoping nobody notices her somewhat slight build and high voice.  And there’s the small matter of her addiction to lotus powder.

But Heron is an inventive sort, and her “magic machines” are in high demand by the local temples, whose local patrons demand the gods provide miracles on a regular basis.  Well, you can lead a horse to water, but you can’t make him drink.  And you can give a priest a mechanical marvel, but if he’s slow of wit and clumsy while operating it, then the audience goes away disappointed.

What’s To Like...
Fires of Alexandria is the first book in an Alternate History series set in Alexandria, Egypt around 100 years after the time of Cleopatra and Julius Caesar.  The city chafes under Roman rule and its high taxes, but is reluctant to face the wrath of the still-potent Roman army.

Thomas K. Carpenter presents a gritty picture of everyday life there; one that includes cussing, torture, fear, drugs, and a myriad of temples dedicated to a myriad of gods and goddesses, all vying for power and money.  I especially enjoyed Carpenter’s keen insights about the priorities of any religion.

Heron’s challenges are threefold: somehow raise the money to pay off huge loans her brother ran up; build war machines for the mysterious, but well-funded Agog; and find out who was responsible for the fire that heavily damaged the Library of Alexandria almost a century ago.  These are all resolved, but in one-after-another fashion instead of all woven together for a  high-tension climax.

I liked that this is not another “save the library of Alexandria” plotline; lord knows I’ve red enough of those.  There are also some way-kewl inventions by Heron (safety goggles, a self-trimming oil lamp, the aeolipile, and quite a few more), a goodly number of which Heron actually did devise, as detailed by the author in a fascinating “Afterwards” at the end of the book, and confirmed by the Wikipedia articles on “aeolipile” and “Hero of Alexandria”.

This is a standalone novel, despite also being the first entry in a 7-book series.  The setting felt “real”, and was free of any clunky info-dumps that one runs into all too often in the Alt-History genre.

Kewlest New Word…
Aeolipile (n.) : a simple, bladeless steam turbine.  (per the Wikipedia article; our protagonist is generally credited with inventing it)
Others : Weregild (n.)

Excerpts...
The patrons of the temple harassed the priests in violet robes on the stairs.  He gathered from the hurled insults that the temple had been faring poorly in exciting its followers.
North or south, once a god had a building to maintain, Agog found them to be quite insistent about tithing and finding the means to encourage it.  He preferred the gods and goddesses of the woods and streams.  They required nothing more than a simple word and the occasional burnt offering.  (loc. 259)

Heron first looked to sea.  Distant sails rose and fell upon the waves as they rode toward Alexandria.  At that place, Heron felt like the center of the known world.  Even more than Rome, which styled itself its capitol (sic).
While Rome had its senators and tales of oration and armies and roads, Alexandria had its Lighthouse and Library.  Rome used its powers to control its Empire.  Alexandria used hers to invite the world to her doorstep.  (loc. 3682)

“Hortio is a prickly man.  He’ll promise the stars and the sun, but in the end, hand you a bucket of dung and call it even.”  (loc. 1430)
There are a couple quibbles, the most serious of which is the freeing of all slaves in Alexandria at the end of the story.  Although I agree that this is a completely repulsive concept nowadays, 2,000 years ago it was an accepted practice in all societies.  If slavery becomes the number one theme of this series, okay fine, I withdraw the quibble.  But here it is incidental to the storyline, and therefore its abolition negatively impacts the authentic feeling of the historical setting.

There is also the matter of a spy in Heron’s workshop.  Whoever it is, they are a major disruption of Heron’s efforts, yet they are never caught and identified.  They just get conveniently written out when Heron sends everybody home for their own safety.  Plot threads are meant to be resolved.

The writing is adequate, but not compelling.  I can’t say that any of the characters reached out and drew me in.  But the storytelling makes up for all these quibbles – there are no telling/showing issues, no slow spots, the action is plentiful, and there’s just enough dry wit and humor (miracles running amok) to balance the gruesome realities.

8 Stars.  Subtract ½ star if you always liked the historical Roman Empire.  If you know who the Hamilcar in this blog’s title references, you’ll understand why I really liked this story.
Posted by Hamilcar Barca at 3:50 PM