Pieces of the Puzzle - Jennifer Fowler and Carrie Wahl 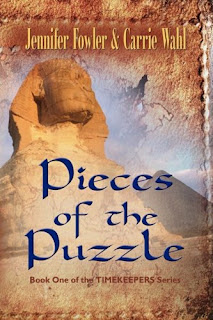 King Gilgamesh has lived for a long, long time, but his days are coming to an end.  He has six children, and the gods have ordained that they too will live for centuries on end, albeit not as long as their father.

There’s a downside to this.  They are fated to be pitted against the six children of Chantu, the implacable foe of Gilgamesh.  And Chantu’s kids, like those of Gilgamesh, will be similarly long-lived.

But the gods have a sense of humor, and have devised several objects that will be up for grabs among the two sets of children, including an amulet, a tablet, a scroll, a bracelet, and a seal.

And a vial.  Which contains the elixir of immortality.  Yeah, that should stir things up for quite a few centuries.

What’s To Like...
The "Gilgamesh" in Pieces of the Puzzle is based loosely on the incredibly old Epic of Gilgamesh story, which comes to us from ancient Sumer.  The Wikipedia article on this is quite interesting and can be found here.  PotP starts out with a prologue, set somewhat soon after the Great Flood; but the bulk of the book is the storylines of the children of Gilgamesh.  Timewise, their stories are set in the 20th Century, and that’s “BC”, not “AD”.

By then, the kids have scattered into Africa, India, China, Mesopotamia, Phoenicia, and North America.  Historically, this is an interesting time for those zones; civilization is just beginning to take root.  And not coincidentally, one each of the Chantu children has also settled in the vicinity of each of these six locales.

The authors have inserted a handy “Cast of Major Characters” at the beginning of the novel.  Bookmark it; you will be referring to it frequently.  The historical settings are adequate for the story, but not overly detailed.  The upside to this is that there are no info dumps.  Stylistically, this is a “cozy” tale – some pirates drown, but that’s about as gory as it gets.  There is also an instance of reaching up a camel’s “canal”, but that’s more funny than gross.

This is not a standalone novel, but it ends at a decent spot, with most, but not quite all, of the rival siblings being drawn to one giant meeting.  Jennifer Fowler and Carrie Wahl have published the sequel, Race To The Portal, but that seems to be it.  It doesn’t look like Book 2 was meant to be the end of this series, but Amazon doesn't show a third book, so the whole effort may have fizzled out.

Excerpts...
“I am seeking the Far Away, Utnapishtim.”
Menachem raised an eyebrow.  “You must come from far to use that name.  What is your purpose?”
“He and his wife know the secret to eternal life.  I wish to be immortal, as well.”
Menachem frowned.  “My children have completely corrupted everything I taught them.  Like all men, you seek the impossible.  It has been decreed no man shall find immortality in this life.  Men are weak, and it is a blessing that our lives here are temporary.  Everything we gain here is as naught when we pass on.  I have seen more life than any man on earth today, and I know it would be a curse to choose this immortality you desire.”  (loc. 132)

They were mean and miserly, hording (sic) everything they had, unwilling to share just one crust of bread with an outsider.  Even their trees were caged to keep animals from stealing one bite of their bounty.  The unfortunate beggar who chanced to come to these cities and ask for a bite to eat would be showered with gold and silver, while all food was mockingly withheld from him.  The poor man would die on the streets with an empty belly and full pockets, which would be raided as soon as he was dead.  (loc. 4041)

“Perhaps…a long life is not always the treasure one might think.”  (loc. 2220)
Truth be told, Pieces of the Puzzle didn’t resonate at all with me.  The pacing was slow, and there was way too much telling and not nearly enough showing.  The half-dozen storylines were too many and too repetitive, and the six protagonists were cookie-cutter clones of each other, and rather dimwitted to boot.

The storytelling is unambitious.  Our heroes are “drawn” to cities, or “feel the need” to board a certain ship.  They also all have the “magic ability” to understand all languages past-and-present, which avoids those pesky communication issues.  Amazingly, one of them is able to gad all around the New World, with only a dog for a companion, and not run into any food or foe problems.

But the real turn-off for me came when the story veered off into Religious Fiction.  I knew I was in for this when Abraham & Sarah (aka Abram and Sarai) were awkwardly and pointlessly inserted into the story, time-after-time, with the authors gushing effusively about how spiritual they were.  The only mystery was exactly what sort of dogma I’d be subjected to, since Abraham/Sarah are crucial to at least three religions – Judaism, Christianity, and Islam.

It took a while, but this finally became clear when swords were introduced into the North American narrative.  The only place you’ll find this sort of nonsense is the Book of Mormon, and no one considers that to be historically credible.  This is not the first time I’ve had to endure religious drivel disguised as literary fiction (another example is here), and it’s one of my pet peeves.  Hey, Jennifer and Carrie, Amazon has a Religious Fiction section; if you want to toss your religious views into a storyline, kindly label your book’s genre(s) properly.  You are not doing God’s Will when you resort to deception.

3 Stars.  Not recommended.  Add 2 Stars if you’re LDS and think all those Jaredites, Nephites, and Lamanites just routinely made transoceanic trips to the New World at incredible speeds.  SMH.
Posted by Hamilcar Barca at 5:37 PM