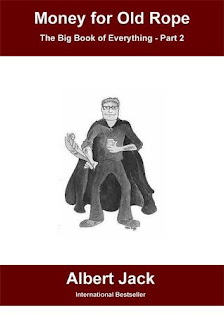 Did Paul McCartney really die in the 1960’s, and have they been covering it up all these years?  Why do they call it “French Toast” if it isn’t French?  What do they mean by “drunk as a newt”?  Is there a hidden meaning to the song-&-dance “The Hoky Poky”?

If you’re the kind of person that finds such questions fascinating (and I do), then you will find Money For Old Rope – Part 2 to be a fun read, perfect for cluttering up your mind with odd facts that will come in handy the next time you play Trivial Pursuit.

And for that matter, just where did the British come up with that strange word/expression “Bollocks”?

What’s To Like...
Albert Jack divides Money for Old Rope 2 into seven sections.  They are :

The sections felt about the optimum length for keeping the reader’s interest.  I don’t know if I can pick a favorite; each section had fascinating anecdotal tidbits.  Chapter 5, Pub Names, was a bit of a yawner, but that’s probably because I’m an American, where the closest thing we have to pubs, our bars, have nondescript names like Moe’s, Larry’s, or Curly’s.  British pub names have histories.

Albert Jack is English, so there are lots of “Britishisms” here, which I always enjoy.  Some of them are topics, such as Toe-Rag, Mufti Day, and Moonlight Flit.  Others, such as “hoick”, are just part of the author’s everyday vocabulary.

The topics seemed well-researched, and I didn’t see any glaring errors.  Indeed, some of the American topics seemed spot on.  There were lots of kewl incidental references as well, such as the French comic “Asterix” (and his pal, “Getafix”); Jane Austen’s “Pride and Prejudice” (which I’m kinda sorta reading right now); and my mother sod, “Berks County, Pennsylvania”.

The writing style is adequate, but not compelling.  More on this in a bit.  There is, naturally, also a Money for Old Rope – Part 1, which I have not read.

Kewlest New Word...
Hoick (v.) : To lift or pull something abruptly, or with effort.
Others : Runcible (adj., and a nonsense word invented by Edward Lear)

Excerpts...
Other rock and roll legends include the time Peter Grant, charismatic manager of Led Zeppelin, was checking out of a hotel in America one day and was reeling off $100 dollar bills from a huge roll of cash to pay for the damage his band and entourage had caused during their stay.  Nervously, the hotel clerk asked, “excuse me Mr Grant, but what is it like to actually through (sic) a television out of the window.”  Grant looked down at the lad and after a short pause peeled off another $300 and replied, “here you are, son, have one on us.”  (loc. 1173)

What we call French toast is known as pain perdu (‘lost bread’) in France itself.  Like toast, it is regarded as a way of using stale (or ‘lost’) bread, slices of which are softened by being dipped in a mixture of egg, milk and sugar before being fried in butter.  In Britain, it was actually referred to as German toast until the First World War when anti-German sentiment caused it to be changed.  (...)  In a further, somewhat ironic twist, French toast briefly became known as freedom toast in America following French disapproval of the invasion of Iraq in 2003.  (loc. 5241)

Kindle Details...
Money For Old Rope – Part 2 currently sells for $3.99 at Amazon, and has a newer book cover than the one shown above.  Albert Jack has a slew of similarly-themed historical-trivia books available for the Kindle, ranging in price from $1.99 to $11.99.
“Odds bodkins, that’s more Blarney talk.”  (loc. 195)
Three things mar this otherwise enjoyable book.  The first concerns the formatting, which is atrocious.  The line spacing varies for no discernible reason.  There are a bunch of links, such as:  (See Melba Toast), but they don’t actually link to anything and often the link-to topic doesn’t even exist at all.  The words in chapters 1 and 7 are in no particular order, so there is a screaming need for an Index, with active links to each topic.  I have a feeling all of this is due to the author pulling these chapters in from his various other books, but still, it’s annoying.

The second issue is the general tone of the “asides”.  Side comments are the soul and wit of any non-fiction book, but here they are mostly negative.  At various times, Albert Jack is anti-French, anti-Aussie, anti-Politically Correct, and even anti-Posh Spice.  If you’re going to write what amounts to a reference work, you should really keep the asides witty, yet not snarky.  You lose readers otherwise.

Finally, there is the labeling of Global Warming as an Urban Legend.  I’m sorry, but the bulk of the mainstream climatologists are firmly convinced that Global Warming exists, and is occurring at an ever-accelerating rate due to the greenhouse gases being belched into the atmosphere.  This is based on scientific evidence, not wishful thinking.  You’re allowed to disagree, and you’re even allowed to put your beliefs in a book.  But when the majority scientific opinion is that Global Warming is a reality, you can’t categorize it as an Urban Legend.

6½ Stars.  Add 1 star if you had friends who really believed Paul McCartney died back in the 60’s.  Add another 1 star if you’re British.
Posted by Hamilcar Barca at 5:39 PM