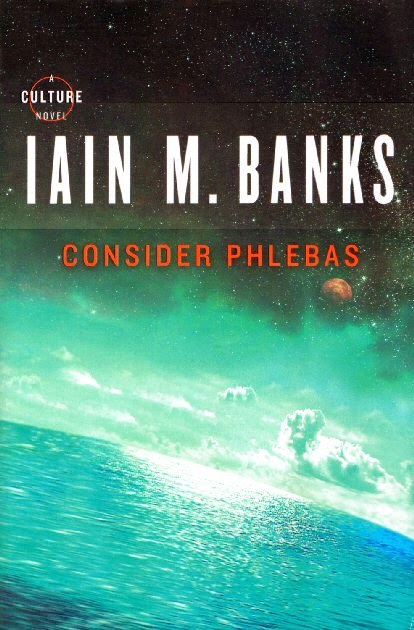 A Mind is a terrible thing to waste.  Particularly when it’s a Culture-developed, self-aware, sentient super computer that’s capable of running everything on a starship all by itself.

Due to unforeseen circumstances, one of these Minds has crash landed on the remote planet called Schar’s World, and the Culture’s bitter enemies, the Idirans, would very much like to get their hands on it.  But Schar’s World is a Dra’Azon planet of the dead, and neither the Idirans or the Culture wants to mess with those folks.

But the Idirans have an agent, a “Changer” human named Bora Horza Gobuchul, who once spent some time on Schar’s World.  Perhaps he should be sent there to retrieve the Mind.  Hey, it’s a planet of the dead, so there’s hardly anyone there.  “Easy in, easy out”.

Of course, if that were the case, there wouldn’t be much of a story to tell.

What’s To Like...
Consider Phlebas is the first novel in Iain M. Banks’ space opera “Culture” setting.  He doesn’t just create a mere ET world or two; he fashions an entire galaxy, and populates it with a slew of races, empires, worlds (including the way-kewl Orbitals), and otherworldly astrophysics (spaceships with Minds).  Then he throws in a bunch of well-developed characters, including a drone with a ‘tude and a decidedly unheroic protagonist.  And fleshes the universe out with a timeline history and reality-building details such as a card game called “Damage”.

The writing is excellent and Banks has a wit about him that will make you chuckle a number of times while turning the pages.  At times, said wit is even macabre, such as when one character showboats by deliberately ‘falling’ off a building, only to realize too late that his anti-gravity suit doesn’t work in this particular setting.  Splat.

But don’t be fooled, Banks also tackles some serious themes to give the reader things to think about.  In Consider Phlebas, the showcased topic is “Faith vs. Reason”, and the author skillfully takes a middle-of-the-road stance, showing the self-destructive tendencies both sides have if taken to the extreme.  The Idirans are religious zealots, and it is refreshing to see the universe presented from their POV.  OTOH, the Culture’s elitism (superior technology means superior human beings) is pernicious, and Banks deftly allows the reader to decide which is the worse – being assimilated by the Idirans or by the Culture.  “None of the above” is not an option.

Excerpts...
“Break out of orbit at once and make full speed for the fleet.”
“Querl, I must point out –“ said a small, steady voice from the helmet on the table.
“Captain,” Xoralundra said briskly, “in this war there have to date been fourteen single-duel engagements between Type 5 light cruisers and Mountain class General Contact Units.  All have ended in victory for the enemy.  Have you ever seen what is left of a light cruiser after a GCU has finished with it?”
“No, Querl.”
“Neither have I, and I have no intention of seeing it for the first time from the inside.  Proceed at once.”  (pg. 21)

“I still think the best thing to do is to head back for The Ends of Invention and lay the whole thing before the authorities.”  The drone rose fractionally above the surface of the table and looked round at them all.  Horza leaned forward and rapped its casing.  It faced him.
“Machine,” he said, “we’re going to Schar’s World.  If you want to go back to the GSV I’ll gladly put you in a vactube and let you make your own way back.  But you mention returning and getting a fair trial one more time and I’m going to blast your synthetic fucking brains out, understand?”  (pg. 289)

And us? Just another belch in the darkness.  Sound, but not a word, noise without meaning.  (pg.  368)
With all of the universe-building going on in Consider Phlebas, the thing that takes the back burner is the plotline.  The reader will struggle for the first 75% of the book wondering what the main storyline is (retrieving the Mind), and what relevance, if any, the numerous and drawn-out tangents have (none whatsoever).

However, if you persist and make it to the last quarter of the book, you will find a superb, focused, action-packed ending, with a (for me, at least) totally unexpected resolution to the story.  And since this is my fourth Iain M. Banks book, I can say this is the norm for his sci-fi epics.

So sit back and enjoy the bizarre worlds, beasts, sentient beings, and lifestyles of the rich and alien.  And trust that Banks will eventually get around to telling, and even completing his story.  It’s worth the wait.

8½ Stars.  Subtract 1 star if ¾ of a book is just too big of a tangent for your reading enjoyment.  Subtract another ½ star if scatological scenes make you feel icky.
Posted by Hamilcar Barca at 3:47 PM