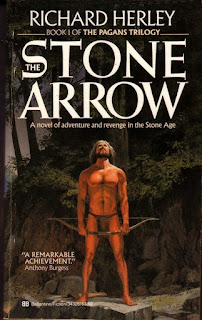 The time is ca. 3000 BC.  In southern Britain, a scourge is sweeping the land, uprooting fauna and flora, and displacing the local hunter-gatherers.  The scourge has a name.  It is called Farming.

One farming village decides to speed up the displacement of a neighboring clan of hunter-gatherers.  They raid the encampment at night, killing everyone there down to the last man.  But they miss that last man, Tagart.  So what?  What can one angry man do against a fortified village of 170 people?

What's To Like...
The Stone Arrow is literally non-stop action.  Tagart is resolved to avenge his tribe by killing as many of the villagers as he can.  Anyone else getting in the way will suffer the same fate.  There will be no mercy, so there is a lot of gruesome violence.  You have rape, dismemberment, torture, and cold-blooded murder of men, women, and children.  This is not a book for the squeamish.

Richard Herley does a nice job of recreating neolithic England at this critical time in civilization.  Things like the towns, animals, and landscape are described in vivid detail, maybe a bit too much so at times.  There's some romance, and even a little humor.  At one point Tagart's ambush fails because he drops his bundle of arrows while perched in a tree.  How droll!  The pacing is frenetic, and the ending is satisfying, despite being used to set up the next book in the series.

Kewlest New Word...
Periapt : an item worn as a charm or amulet.  (archaic).

Excerpts...
Hernou was afraid.  The savages were killers.  It was the way they lived, by hunting and killing.  They thought no more of blood and murder than did the farmers of soil and harvest.  The harsh forest life streamlined their tribes and made them strong and ruthless, like the animals they sought for their prey.  Their discipline, their life, were impossible to understand.  For them to swim free in the seasons, not to have precise tasks for each week and day, but to wander the land by whim: this alone thrust the savages far beyond comprehension.  (39%, location 1296)

He waited, as if he were waiting for deer, exploring his thoughts.  The water-bottle lay at his side.  No mistake.  Fifty miles to Burh.  He could not risk using the Valdoe roads.  A forest route, then.  Twenty miles a day, his usual speed, would be too much for him in his present state.  Fifteen.  Allow three days.  Four at most.  Burh in four days.  Four back to Valdoe.  That left two spare days before Crale Day.
It could be done.  He could get the girl out somehow.  (67%; location 2181)

Kindle Details...
This was, and still is, a free download at Amazon.  The next two books in the series, The Flint Lord and The Earth Goddess, are reasonably priced at $2.99 each.

"Look what the savages have done."  (5%; location 189)
I do have a couple quibbles with some of the historical details.  In particular, using bolas as weapons, the sport of falconry, and the wearing of (presumably metal) armor and helmets.  Were any of these really present 5,000 years ago in Britain?

But The Stone Arrow is primarily an action tale, and only secondarily a piece of historical fiction.  So we'll forgive a few anachronisms, and be happy that Richard Herley made the effort to set the story in such a fascinating time.  8 Stars.  This is as good of a freebie download of contemporary fiction as I've found yet at Amazon.  Quite likely I'll be reading the sequels in the next couple of months.
Posted by Hamilcar Barca at 5:12 PM