The Girl Who Kicked The Hornet's Nest - Stieg Larsson 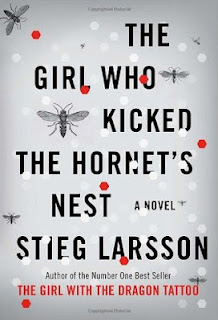 Lisbeth Salander has problems.  Her father wants her charged with (his) Attempted Murder, which is understandable since she belted him in the face with an axe.  A psychiatrist wants  her put away as a paranoid schizophrenic.  And a bunch of shadowy government security agents want to kill her.

Normally, this isn't anything Lisbeth couldn't handle.  But she's lying in a hospital, in critical condition, with a bullet in her head.

What's To Like...
The book is a successful close to the trilogy.   Questions about Lisbeth's past are answered, and loose threads of any significance are tied up.

This isn't a mystery tale.  Larsson basically tells you every step the bad guys take.  But he deftly ramps up the tension with every chapter and you're never sure how things will turn out.

As usual, Larsson interweaves several storylines.  Erika Berger has a new job with a competitor's magazine, and someone's stalking her.  Lisbeth and her hacker friends are matching "snooping wits" with the baddies.  Mikhail Blomkvist is investigating a clandestine government agency and bedding every woman in sight.  But all things get connected by the end.

The action is sparse for the first 500 pages, but it's worth the wait.  When the trial begins, things take off.  The ending stutter-steps, yet still is gripping.

Excerpts...
"I think you're right," Erlander said to Blomkvist as they walked back to the farmhouse.  "An analysis of the blood will probably establish that Salander was shot and buried here, and I'm begining to expect that we'll find her fingerprints on the cigarette case.  Somehow she survived and managed to dig herself out and -"
"And somehow get back to the farm and swing an axe into Zalachenko's skull," Blomkvist finished for him.  "She can be a moody bitch."  (pg. 26)

You could take it for granted that the Security Police invariably made fools of themselves.  That was the natural order of things, not for Sapo alone but probably for intelligence services all over the world.  The French secret police had sent frogmen to New Zealand to blow up the Greenpeace ship Rainbow Warrior, for God's sake.  That had to be the most idiotic intelligence operation in the history of the world, with the possible exception of President Nixon's lunatic break-in at Watergate.  (pg. 228)

"Been there, done that, got the T-shirt."  (pg. 616)
There are some weaknesses in The Girl Who Kicked The Hornet's Nest, one of which are some you-gotta-be-kidding-me moments.   For example, Lisbeth and her dad both claim that the other had tried to kill them.  Yet they're both taken to the same hospital, put in room two doors from each other, and no one thinks to post any police guards.  Sheesh.

The stretches of no action and stutter-step ending have already been mentioned.  But the main problem with TGWKTHN is Lisbeth herself.  She's the star of the book who ...um... tends to kick the hornet's nest; but for most of the book she's confined either to a hospital bed or a jail cell.  No wonder the story has some slow spots.

Yet somehow, it all works.  You keep turning the pages  and staying up late to see what happens next.  Stieg Larsson may not be the best writer ever, but as a storyteller, he's second to none.  8 Stars.
Posted by Hamilcar Barca at 4:10 PM