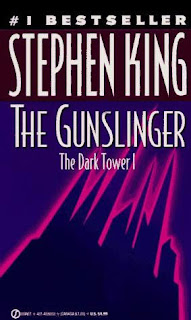 "The man in black fled across the desert, and the gunslinger followed."  That's the opening sentence, and pretty much sums up the plot of The Gunslinger.  Along the way, he passes through a town; stops by a way station; matches wits with an oracle; outwits some monsters; and faces an impossible choice given by the man in black.

What's To Like...
This is really five short stories that Stephen King wrote for The Magazine of Fantasy and Science Fiction over a three-year period.   This is some of his early stuff when he was still developing his writing style.

Frankly, the first story - the eponymous "The Gunslinger" is ho-hum.  The storyline is weird and vague, and the style is ostentatious.  For example, there's this sentence : "He did not use the flint and steel until the remains of the day were only the fugitive heat in the ground beneath him and a sardonic orange line on the monochrome western horizon."  Yeah.  Or he could've just written, "He built a fire at sunset."

But if you persist and read further, the storytelling improves and the style becomes more direct.  You can see/read him refining his technique from one story to the next.  This is Book 1 of the 7-volume (soon to be 8) "Dark Tower" series, which Stephen King considers to be his magnum opus.  Lots of people are gaga about it, so I presume the books continue to get better.  They certainly get thicker.

There are lots of teasers in The Gunslinger ("Hey Jude" is said to be an ancient song); some humor; some food for thought; and a kewl post-apocalyptic setting.  Maybe.  Or perhaps it's a parallel universe.

Excerpts...
"...in the end, someone always has to have his or her neck popped, as you so quaintly put it.  The people demand it.  Sooner or later, if there isn't a turncoat, the people will make one."  (pg .148)

But the man in black persisted: "Shall there be truth between us, as two men?  Not as friends, but as enemies and equals?  There is an offer you will get rarely, Roland.  Only enemies speak the truth.  Friends and lovers lie endlessly, caught in the web of duty."  (pg. 295)

Beyond the reach of human range
A drop of hell, a touch of strange...  (pg. 179)
Strangely, The Gunslinger reminded me of Cormac McCarthy's The Road.   A man and a boy (the gunslinger picks him up at the way station) go traipsing around.  You're not sure where they're going and why they're going there; and when the ending shows up, you discover very little is resolved.  It should be remembered that this is just a prelude to the main storyline, and because the chapters were really separate stories in a sci-fi mag, the book inherently has a "segmented" feel.

In and of itself, this is only a so-so novel.  But it gives some vital background about (what I presume are) several of the major characters in the series, and the surreal world they travel about in.   It's a fast read, and it gets more entertaining as you go along.  We'll give it 5 Stars, but call it a must-read if you intend to do the whole series.
Posted by Hamilcar Barca at 6:31 PM