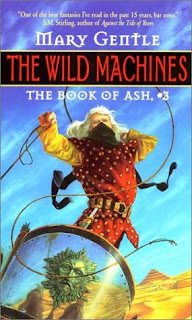 Book 2 in the series closed with half of Ash's mercenaries (a couple hundred all told) journeying to Carthage and rescuing her.  Book 3 opens with them now just outside Dijon, trying to join up with the rest of her force.

The bad news is that there are 20,000 Visigoths besieging Dijon.  The badder news is Charles, Duke of Burgundy, lies within, mortally wounded.  Upon his death, the city's defense will surely crumble.  The baddest news is the Visigoths are led by Ash's twin half-sister (is that an oxymoron?), The Faris, and she is militarily invincible.

What's To Like...
As always, Mary Gentle paints a realistic picture of a soldier's life in 15th-Century Europe.  It's gritty; it's bleak; and the best you can hope for is to die quickly and cleanly.  The characters are well-developed and interesting; and the Alternate History is believable.

The first 300 pages focus on the siege, with Ash and company trapped inside Dijon.  There are occasional assaults by the Visigoths, but mostly we sit around waiting, and discussing all the equally bleak options.  That's probably how it is during a siege, and it can be a bit tedious.

The last 100 pages are all action, and there's a neat and unexpected ending to The Wild Machines, despite the fact that this is actually one humongous book chopped up into quarters for us attention-span-challenged US readers.

Kewlest New Word...
Meretricious : apparently attractive but having in reality no value.  Here, a meretricious proverb.

Excerpts...
"Everything they ever said about mercenaries is true!  We're nothing but a bunch of horse thieves!"
"Takes talent to be a good horse thief," Euen Huw remarked professionally, and flushed.  "Not that I'd know, see."  (pg. 144)

"We'll get you another warhorse," Anselm said, appearing at a loss when she did not speak.  "Shouldn't have to lay out more than a couple of pounds.  There's been enough dead knights won't need 'em anymore."
"Jeez, Roberto, you're an ever-present trouble in time of help..."  (pg. 165)

"How long it is, since last you spoke to me?"
"Minutes... Not even an hour."
"I cannot tell, child.  Time is nothing where I am.  I read once in Aquinas that the duration of the soul in Hell may only be a heartbeat, but to the damned it is eternity."  (pg. 260)

"You can't hide anything from the washerwoman.  Courage is brown." (pg. 297)
The total time elapsed in The Wild Machines is three days.  Given that it's a quarter of the total opus, one certainly hopes that some it contains some significant events, but we won't know until we read Book 4.

Mary Gentle is a skilled writer who kept my interest throughout the long siege in this book.  The storyline is complex, and there are enough characters and subplots to make me look forward to reading the next (sub)-book, Lost Burgindy, to see how she's going to tie everything up.  Stay tuned.  8 Stars.
Posted by Hamilcar Barca at 8:30 PM