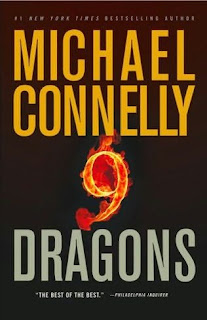 2009; 374 pages. A NY Times Bestseller (but what isn't?). Genre : Crime Fiction. Overall Rating : 7*/10.
.
In a tough L.A. neighborhood, an elderly Chinese shop owner is brutally gunned down. Detective Harry Bosch investigates, and as he pieces the case together, he's introduced to Chinese gangs known as The Triads. Alas, someone is leaking information to the baddies and he gets a phone call telling him to back off. Then his daughter is kidnapped in Hong Kong, and a video of her, bound and gagged, is sent to Harry as a message.
.
Now Harry has a very limited amount of time to rescue his daughter half a world away, then get back before his suspect flees L.A. to the safety of mainland China.
.
What's To Like...
It's an action-packed story with no slow spots. Besides working on the double-pronged case, Harry has to deal with a partner that no longer has any taste for the job and a colleague from the Asian Gang Unit who can't be trusted. Harry repeatedly has bouts of foot-in-mouth disease, and some of his theories turn out to be logical, sensible, and wrong.
.
There are enough plot twists to keep you on your toes, and the ending wraps up nicely, without any loose ends. There are Chinese characters in the story (always a plus for me), and a lawyer who isn't your stereotypical scumbag.
.
OCONS? I got your Ocons right here...
The main problem with Nine Dragons is that there are too many OCONs, which I just made up, and which stands for "Oh, come on now!". Here are three of them.
.
a.) The shopkeeper takes three bullets at close range in the chest. He's bleeding out and has 30 seconds to live. Yet he has the presence of mind to grab a key piece of evidence and swallow it. Wow. That's not how I'd be using the last half-minute of my life. b.) In the kidnap video of Harry's daughter, she tries to kick the cameraman. She misses, but the camera jerks away for a second. And just happens to briefly record the view outside the hotel window. Which has not one, not two, but three identifying objects to help in locating the hotel. Talk about a lucky break. c.) Then there's the timing of the Hong Kong rescue mission. Harry has 24 hours after he lands there to locate his daughter, kill the baddies, rescue her, and get back on a plane to L.A. to stop the suspect from fleeing. And he succeeds. Sheesh. If only the perpetrator had been bin Laden.
.
There are several other Ocons, which we'll skip so as to not give any spoilers. Suffice it to say, this is not a Police Procedural tale. Harry waltzes into Hong Kong, refuses to even contact the local police, sashays out with his daughter in tow while leaving nine corpses in his wake, and Hong Kong law enforcement is clueless the whole time. Yeah, like that would happen.
.
Kewl New Words...
Funicular : describing a tram (or other conveyance) that goes up the side of a mountain, pulled by a cable. Gimballed : describing how a ship's compass is suspended so that it's unaffected by the movement of the boat. The technical aspect of a gimbal is interesting, but not worth detailing here.
.
Excerpt...
"Kowloon," Starkey said. "Sounds sort of ominous."
"My daughter told me it means 'Nine Dragons.'"
"See, I told you. Who would name their neighborhood Nine Dragons unless they wanted to scare people away?"
"It comes from a legend. During one of the old dynasties the emperor was supposedly just a boy who got chased by the Mongols into the area that is now Hong kong. He saw the eight mountain peaks that surrounded it and wanted to call the place Eight Dragons. But one of the men who guarded him reminded him that the emperor was a dragon too. So they called it Nine Dragons. Kowloon." (pg. 143)
.
Fu, Cai. Ai, Xi.
("Luck, Money, Love, Family", and tattooed on the shopkeeper's ankles)...
There's no denying that the Ocons present some believability issues. I don't think this will go down as one of the better Harry Bosch books. But Connelly has always been a master storyteller, and that's still true here. Nine Dragons is fiction, not literature; and works just fine as long as you don't stop to analyze the details. We'll give it 7 stars, recommending that you turn the right-hand half of your brain off and just enjoy the ride.
Posted by Hamilcar Barca at 5:42 PM

Loved this book,but not as much as the other Harry books,I would give 8.
Kay O'Sullivan

i agree - i liked Echo Park and The Concrete Blonde better.

and despite the technical flaws in Nine Dragons, i still very much enjoyed it. which made deciding what to rate it difficult. what can i say? i love Harry Bosch novels.