Inspector Hobbes and the Blood 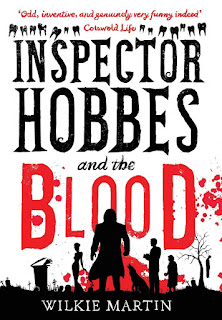 There’s been a strange breaking-and-entering at Mr. Roman’s estate.  Someone smashed open one of the windows, climbed through, and stole one of Mr. Roman's violins.

It was a good violin; you could even call it an expensive one.  But it wasn’t a collector’s item, and there were many more valuable items in the house that were left untouched.  Apparently Mr. Roman was quite upset about all this; he hanged himself shortly thereafter.

The police have assigned Inspector Hobbes to investigate the case.  He’s quirky, can be heavy-handed at times, but has an excellent record for solving these kind of perplexing crimes.  And tagging along will be Andy Caplet, a journalist with the local Sorenchester and District Bugle, known for his poor record as a reporter.  It seems no one else at the office wanted this assignment, so they sent Andy.

It seems this heist is just the start of a string of robberies in the Sorenchester area.  A short time later, cups and knives, and even people are going missing.  Will Inspector Hobbes be able to figure out what’s going on, and will Andy’s assistance, help or hinder him?

What’s To Like...
Andy and Hobbes are an entertaining pair of protagonists – somewhat reminiscent of the Sherlock Holmes & Dr. Watson team.  But there are lots of differences too, and Wilkie Martin is to be commended for not slavishly duplicating the famous duo.  I’ve read some of the modern-day authors who write “new” Sherlock Holmes series (they can do this because the copyright on that name has expired), none of them yet has come close to matching Arthur Conan Doyle’s writing skills.

The story is set in the fictitious cities of Sorenchester and Pigton, which are situated in the real Cotswolds area of England, and which I presume is the author’s stomping grounds.  Unsurprisingly, it is written in English, not American, which meant oodles of new words for me.  You can munch on chocolate Hobnobs (I found some of these over here with some help from my friends), get your food via a takeaway, or make a slap-up meal of your own, have a top-up if your drink runs low, and hope that your manky rug isn’t pong.  There were several dozen more of these expressions in the book; a few more of them are listed below.  I was in Anglophile heaven.

the primary plotline was well-contrived – a string of burglaries of a strange set of artifacts.  Andy and Hobbes know the purloined pieces are connected in some way, the fun is figuring out exactly how.  The secondary storyline concerns the book’s genre itself – are there some paranormal critters scampering around Merrie Olde Englande, or is Andy’s imagination just running wild?  The reader gets a pretty good idea what the answer to that is by the end, yet a sliver of doubt remains.

I thought the humor was handled very well.  Puns, wit, and tall tales abound, yet it’s not overdone.  The end result is a funny story, but not a silly one.  The ending is suitably climactic and exciting.  The final chapter is essentially an epilogue, with the various plot threads being resolved via Hobbes explaining to Andy how the evildoers did their evil.  Shades of Holmes and Watson finales!

I loved the use of one of my favorite words, “Daliesque”, and chuckled when “thistledown” made an appearance.  I don't recall ever running across this word before this year, and now this is the third time in 2019 it’s cropped up in books I'm reading.

The chapters are of moderate length: 19 of them covering 308 pages.  That averages out to around 16 pages per chapter.  Amazon touts the book as being a “cozy” mystery, and for the most part it is.  But it should be noted that there is a fair amount of cussing; I thought it fit in well, but cozy purists may wince at this.  Inspector Hobbes and the Blood is a standalone story as well as the first book in a series.

“What are you here for?  I’ve done nothing.”
“Nothing?” said Hobbes.  “I’m not sure about that.  Didn’t you knock out a customer’s teeth on Wednesday?”
Featherlight scowled.  “That’s a lie.  I did no such thing – it was on Tuesday and it wasn’t all of them.  I didn’t hear the customer complain.”
“He was unconscious.”
“He was out of order, whinging about a dead mouse in his beer when it was only a bit of one.”  (loc. 1471)

Kindle Details...
Inspector Hobbes and the Blood currently sells for $2.99 at Amazon.  The other three books in the series are all in the $4.07-$4.99 price range.  Alternatively, you can buy the first three books in a bundle; it goes for $6.29 right now. Other than one short story (52 pages) that goes for $0.99, I think that’s all the Wilkie Martin books available at Amazon for now.

“Your reputation for stupidity doesn’t do you justice.”  (loc.  4451)
A number of Amazon reviewers totally hated Andy, consequently giving Inspector Hobbes and the Blood some extremely low ratings.  Well, Andy is certainly not the noblest of characters.  He’s insanely jealous of a coworker, even to the point of planting false evidence to implicate him.  He also repeatedly goes snooping around in Hobbes’s house, uncovering secrets he’s not meant to know about.

Everyone’s entitled to his own opinion, but personally I like anti-heroes.  They are always more interesting than can’t-do-anything-wrong protagonists, and I have a feeling that Andy will mature a bit as the series progresses.

9 Stars.  I’ve been meaning to read Inspector Hobbes and the Blood for quite some time now, and was pleasantly surprised by the book’s charm, particularly since it is the author’s debut effort.  Here’s hoping he puts out many more books, and that the 4-volume Inspector Hobbes series is not yet completed.
Posted by Hamilcar Barca at 6:51 PM