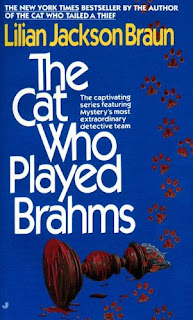 The hustle and bustle of city life is getting reporter Jim Qwilleran down.  So it’s quite timely that a distant acquaintance, Aunt Fanny has a cabin up in the sticks that she’d be happy to let him stay at for the summer.  Heck, even Jim’s two cats, Koko and Yum Yum, might enjoy the change in scenery.  It’s a perfect time for him to begin writing his novel.

Being up in the mountains, close to the Canadian border, and away from where he works is not a problem.  His job for the Daily Fluxion is to write restaurant reviews, so if the place he’s going, some Podunk place called Mooseville, has any eating establishments, maybe Qwill can justify this as an extended and relaxing business trip.

However, what if you find that the chirping crickets and other things that go bump in the night keep you awake in your cabin, Qwill?  What if there are some deep dark secrets that sleepy little Mooseville is anxious to keep hidden, so the tourists don’t get scared away?  Well, not to worry, the locals probably have ways to keep a clueless reporter from getting suspicious about anything.

But Koko and Yum Yum might not be so easily fooled.

What’s To Like...
If you’re in the mood for a cozy mystery, The Cat Who Played Brahms is tailor-made for you.  There are three deaths in the book, all of which occur offstage, with only one of those bodies being “seen” by our protagonists.  There are lots of people in Mooseville (and nearby Pickax) who act like they’re hiding something, so there’s no shortage of suspects.

It’s fun to watch city-bred Jim Qwilleran try to adjust to life in a small, sleepy rural town.  In theory, he should have lots of time to work on his book, but Lilian Jackson Braun keeps the pacing brisk enough to where somehow he never quite gets around to starting on it.

There aren’t a lot of settings – just the city where Qwill works for the Fluxion, and the great outdoors around Mooseville and Pickax.  There’s a huge lake by Qwill’s cabin, and it is mentioned that its far shore  is Canada.  But beyond that, it’s never made clear exactly what state this series is set in, just somewhere in the Midwest.

The first murder, if indeed it is one, takes place on page 75.  In case you’re wondering, neither cat actually plays any Brahms on a musical instrument, but Koko keeps hitting the button on a tape player at the cabin, which has a cassette with a Brahms concerto (Opus 102) on it.  I’d never heard of this piece, so I looked it up on YouTube.  I don’t recognize it as anything well-known, but I love classical music, and anything by Brahms will appeal to me.

There are a couple of mild cusswords, and the aforementioned corpse being discovered by our trio of heroes.  Qwill and Rosemary might eventually fall in love, but here it’s only a figment of their collective imaginations.  All in all, this is a very "cozy" cozy.

The ending is okay, but don’t think you’re going to solve the case before Qwill and the cats do.  This is the third book I’ve read in this series, and I get the impression that its main allure is seeing how the cats are going to solve each mystery.  The feisty felines do not disappoint here

Kewlest New Word ...
Halfhear (v.) : to hear something imperfectly or incompletely.  Yeah, that’s obvious, but I don’t recall seeing "halfhear" as an actual word before.

Excerpts...
“Tell me all about Aunt Fanny after you meet her.”
“She calls herself Francesca now.  She doesn’t like to be called Aunt Fanny.  She says it makes her feel like an old woman.”
“How old is she?”
“She’ll be ninety next month.”  (pg. 15)

Koko was pacing restlessly from the porch to the kitchen to the guest room and back to the porch.
“He’s disturbed,” Qwilleran explained, “by his instinctive savagery in attacking the burglar.  Koko is a civilized cat, and yet he’s haunted by an ancestral memory of days gone by and places far away, where his breed lurked on the walls of palaces and temples and sprang down on intruders to tear them to ribbons.”
“Oh, Qwill,” Rosemary laughed.  “He smells the turkey in the oven, that’s all.”  (pg. 193)

“They say elephants can hear the footsteps of mice.”
“I hope you’re not implying that I have large ears.”  (pg. 90)
Since it was nominated for a literary award, The Cat Who Played Brahms is apparently considered to be one of the better books in this series.  I enjoyed reading it, but I didn’t find it to be a well-constructed mystery novel.

My main beef is with the story threads.  There are a slew of them, the majority of which never get tied up, despite Lilian Jackson Braun devoting the entire last chapter to doing just that.  Specifically:

This is a spoiler-free blog, so I’ll refrain from giving more details, but of those eight threads, ANAICT, only three get resolved.  But maybe I should think of them as red herrings.  And perhaps I should dwell more on how the cats are gonna catch the bad guys.

5½ Stars.  Add 2 stars if you used to like the TV cozy-mystery show, Murder, She Wrote.  This series will probably charm the daylights out of you.
Posted by Hamilcar Barca at 4:53 PM