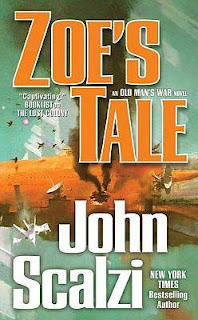 Zoe Boutin-Perry is a lucky girl.  The Chosen One.

She’s the adopted daughter of Major John Perry and Lieutenant Jane Sagan, the husband/wife team of colony leaders on Huckleberry, a colony on a faraway planet.  But she’s also the biological daughter of the late Charles Boutin, who gave the alien race called the Obin that which we call “consciousness”.  The Obin revere her because of this “gift” from her dad and have sworn to defend and protect her no matter what.

By treaty, the Obin have been permitted to assign two of their kind as bodyguards to Zoe, with the provision that the pair are also allowed to monitor and record Zoe’s feelings as she grows up.   The Obin may have consciousness now, but they sorely lack any emotions.  They are eager to learn how to “feel” human.

All of this makes Zoe an important player in galactic politics.  Certain alien empires, by taking her hostage, could gain important leverage in the galaxy; and killing her might have some military advantages.  But there's a cost, at least in Zoe's mind.  The presence of two hulking, powerful alien bodyguards makes finding and keeping a boyfriend a daunting task.  No one wants to be killed because his kiss was erroneously interpreted as a hostile act.  So it’s not surprising that Zoe has a secret desire.

To just be a normal teenager.  With normal friends, with no one trying to kidnap or kill her, and with a normal boyfriend.

Good luck with that, Zoe.

What’s To Like...
Zoe’s Tale is the companion to the previous book in the series, The Last Colony (reviewed here).  It takes place at the same time, and in the same setting, but is told from the viewpoint of Zoe, the daughter of the two protagonists.  John Scalzi divides it into three parts, namely:

Most of what I liked in this book is a repeat of the good things about The Last Colony.  There are crazy-kewl critters, well-developed characters, and a blurring of the difference between a good guy/creature and a bad guy/creature.  The “how can we live without our electronics?” theme is once again deftly and lightheartedly explored, and this time it’s supplemented by Zoe’s personal struggle to come to grips with “why can’t I just be allowed to live a normal life?” motif.

As in any John Scalzi novel, there is an abundance of wit, perhaps even a bit more here since we’re following a bunch of sassy teenagers and their interactions.  There’s also some a couple of romances to follow, and Enzo’s love poem “Belong” (pg 298) is a powerful bit of prose.  It’s fun to watch Hickory and Dickory, the two Obin bodyguards who are also assigned to learn all about human emotions.  They struggle with the complexities of romance, since they’re hermaphroditic.

Cusswords are both rare and mild, and mostly spoken by Zoe.  It’s nothing you wouldn’t hear in any normal YA conversation.  I liked the role the Colonial Mennonites play, and laughed at the term “Roanokapella”.  The book is written entirely in the 1st-person POV (Zoe’s), and the chapters are reasonably short: 25 of them (plus a prologue) to cover 400 pages.  The author’s “Acknowledgements” section (pgs. 401-406) is worthwhile reading.

The ending was a mixed bag for me.  I found the Action parts a bit too conveniently contrived, but OTOH the titular “Zoe’s Tale” resolution was great.  This is both a standalone novel and part of a completed, 6-book series.

Excerpts...
“At least I’d get to see you every once in a while.”
I didn’t have a good answer to that.  So I just gave Enzo a kiss.
“Look, I’m not trying to make you feel bad or guilty or whatever,” Enzo said, when I was done.  “But I would like to see more of you.”
“That statement can be interpreted in many ways,” I said.
“Let’s start with the innocent ones,” Enzo said.  “But we can go from there if you want.”  (pg. 198)

This General Gau was in his way a remarkable person.  He wasn’t like one of those tin-pot dictators who got lucky, seized a country and gave themselves the title of Grand High Poobah or whatever.  He had been an actual general for a people called the Vrenn, and had won some important battles for them when he decided that it was wasteful to fight over resources that more than one race could easily and productively share: when he started campaigning with this idea he was thrown into jail.  No one like a troublemaker.  (pg. 273)

“He writes me poems.  I document his physical ineptitude.  That’s how the relationship works.”  (pg. 121)
The big issue I had with Zoe’s Tale, and one that can’t be circumvented is: If the reader has read The Last Colony (and I have), then there really are no twists, surprises, and/or tension in the storyline.  You’ve read it all before.

I like that the author takes the time to address the storytelling omissions from the previous book (which he recounts in the Acknowledgements), but perhaps it would’ve been more effective to just issue a new version of The Last Colony.  Yes, as John Scalzi points out, that would mean lengthening the book.  But the critter-danger episode is hastily resolved here, and Zoe’s diplomatic efforts, part 3 in this book, would only add about 120 powerful pages to the story.

So the 320-pages of The Last Colony would now become, say, a 460-page tome.  That’s not much longer than Zoe’s Tale, which is 400 pages long.  It would also negate the other issue I had with Zoe’s Tale: there just isn’t  much action in it.

6½ Stars.  If you’ve read the first three books in this series, you can skip Zoe’s Tale without missing anything vital to the overall plotline.  If you’ve read only the first two books, then you can choose either The Last Colony or this book for the next part of the saga.   You can even read all four books, as I did, and be adequately entertained despite encountering nothing new.  John Scalzi's writing skills apparently are sufficient for telling the same story twice.
Posted by Hamilcar Barca at 5:52 PM